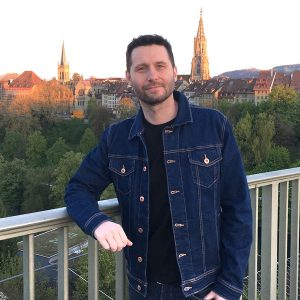 In 2015, just after receiving my PhD in neuroscience from George Mason University, I began my journey into freelance writing while I continued research part-time with colleagues in the psychology and neuroscience departments. Since then I have had over 100 articles published at outlets like The New York Times, BBC Future, and The Atlantic, and have authored five academic papers in journals such as Human Brain Mapping, Cognition & Emotion, Acta Psychologica, and Philosophical Transactions of the Royal Society. In 2017 I was hired to assist in developing Season 2 of the YouTube Premium psychology-based series Mind Field, which won the show its first Emmy nomination.

Although my expertise is in cognitive neuroscience and psychology, I have a B.S. in biology and a long-time interest in theoretical physics and artificial intelligence. I write about current events, politics, and culture from a scientific perspective, but my passion for science has always been largely motivated by philosophical and spiritual questions, such as how and why we find ourselves in a universe that inevitably and effortlessly generates life and conscious beings with seemingly infinite technological and intellectual potential.

I am the creator of the blog Mind in the Machine hosted by Psychology Today, which has received over 2 million views. I’ve made media appearances to discuss my articles on Fox News Radio, Newstalk National Radio Ireland, and Web shows and podcasts, like The Damage Report (The Young Turks network) and The David Pakman Show. I have worked with The Atlantic and The Huffington Post to create scripts and videos adapted from my articles, like this short animated film on the fear of eternity. In my free time I like to write music and skateboard (you’re never too old). I am also a film nerd with a love for the works of directors like Spike Jonze, P.T. Anderson, Wes Anderson, and Tarantino. I live in Arlington, Virginia, just outside Washington, DC with my yoga-wizard wife and my cat-son, Seymour.